Lake of the Ozarks Shootout History

The Lake area has been buzzing about the 27th Annual Lake of the Ozarks Shootout all week.  Saturday and Sunday, boats will be competing for the honor of "Top Gun" by traveling at incredibly fast speeds.  A lot of interesting things have happened over the past 27 years to make the Shootout what it has become today.  BomBay Boat Rental Co. has some of that history right here for you. 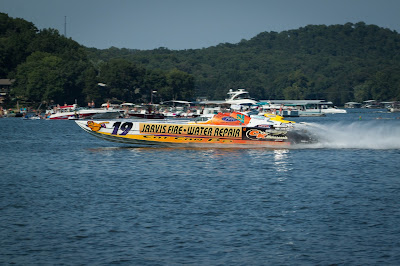 1988:  The Shootout is born!  Many local boaters got together to see who had the fastest boat.  This event benefited the Lake are fire departments of Lake Ozark, Osage Beach, and Sunrise Beach.

1996:  The Grovois and Mid-County Fire Districts joined the action.

2006:  A new course record was set this year by Dave Callan and John Cosker.  They were clocked at an incredible 208 mph!

2007:  John Cosker got a little faster this year.  He broke his own record going 209 mph.  This was the last year that the Shootout would be held at Shooter's 21. 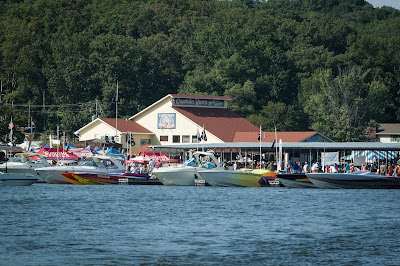 2009:  This year not only brought a new course record from Dave Scott at 196 mph, but a record attendance was reached with over 70,000 people attending the races.

2010:  Dave Scott, along with John Tomlinson, once again set another course record.  They reached a speed of 208 mph.  The Shootout added 6 new events, making it the week-long celebration that we expect today.  $70,000 was donated to 20 different charitable organizations.

2011:  Canadian Bill Tomlinson and Ken Kehoe claimed the top honor this time.  They ran the course 8 times and tied the record of 208 mph on three of those runs.  This year saw over 100,000 fans attending.

2013:  The 25th Anniversary Shootout added a Shootout Hall of Fame and inducted 10 new honorees from the past 25 years.  New records this year included:  Joe Srgro reaching 192 mph as top V, Dan O'Keefe was top PWC at 95 mph, and Brad Rowland had the top pontoon run at 114 mph.  Bill Tomlinson once again set a course record with an astonishing 224 mph.  $115, 000 was raised for 22 organiztions.

2014:  This year brought new records, but also tragedy.  The "Spirit of Qatar" made two record-breaking runs during this year's Shootout, and his final top speed was an unbelievable 244 mph.  Sadly, Joel Begin's boat, throttled by Mike Fiore, flipped end over end at the finish line.  Joel was able to walk away from the hospital, but Mike passed away on the Tuesday after the races. 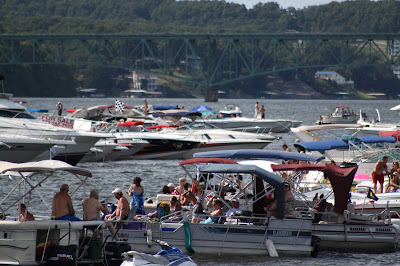 This year's Lake of the Ozarks Shootout is expected to be even bigger and better than ever.  All of us here at the best boat rental company at the Lake of the Ozarks can't wait to see if more records are broken.  Whether you listen on the radio, watch on television, or get the awesome chance to see the races live, this is an annual event that you should not miss.

It's Lake of the Ozarks Shootout Time Again!

It's time for the exhilarating 27th Annual Lake of the Ozarks Shootout!  These awesome boat races bring thousands of people to the Lake to witness pure speed and adrenaline.  You can watch them on tv or from the shore, but the very best way to witness these races is from the water.  The best boat rental company at the Lake of the Ozarks has got the perfect ski boat, tritoon, or jet ski to get you out there and close to the action.

The races are the highlight of the Shootout, but over the years lots of events have been added.  There is now something going on every day for ten days in a row, and that's not even including the related poker runs that have already taken place recently.

There is another poker run coming up, plus a Mini Shootout, a Stereo Shooutout, a hunt for buried treasure, and more.  One of the favorite events is the Meet and Greet on the Bagnell Dam Strip, Wednesday, August 26.  From 5 pm - 10 pm, you can see the race boats up close and get a chance to talk to the drivers and their race teams.  You can find a full schedule and detailed information at www.lakeoftheozarksshootout.org.

The Lake of the Ozarks Shootout is not only a good time, but it raises money for lots of really wonderful local charities and organizations.  It started out as a way to raise funds for the Lake of the Ozarks fire departments to purchase water rescue equipment, but grew into something much, much bigger.

There are a few rules to keep the races both fun and safe when you watch the main event from a boat. 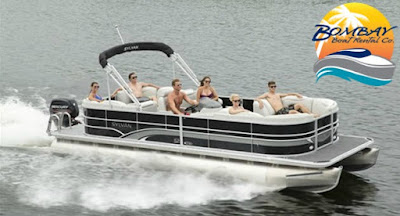 There is lots of fun to be had all week long, and you definitely don't want to miss those incredible boat races.  Contact BomBay Boat Rental Company today to make sure that you get one of our Lake of the Ozarks boat rentals before they are all taken.  We want everyone at the races to have an enjoyable, exciting, and safe time this year.

3 Reasons You Will LOVE Riding Our Jet Skis

Have you had a chance to take out one of our jet ski rentals at the Lake of the Ozarks yet?  If you are looking for an awesome time on the water, then a jet ski rental is the way to go.  The Sea-Doo GTI 130 is BomBay Boat Rental Company's jet ski of choice.  If you aren't familiar with all of the wonderful reasons to take a ride on one, here are a few that should turn you on to the idea.

1. They are easy to get out on the Lake.

Our jet skis are lightweight, and the compact design makes it easy to get them into the water and get you on your way.  Another great bonus is the fact that they are extremely fuel efficient.  That means lots of cruising around the Lake for less money spent on gas. 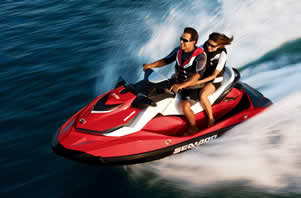 2. They are easy to maneuver.

This particular jet ski is the only watercraft of its kind that comes with an on-water brake.  This means that you will be able to come to a stop up to 100 feet sooner than on other jet skis.  The brake is located on the left side of the handlebar, meaning you never have to take your hands away from them. Squeezing the brake lever brings you to a stop, and squeezing it again while stopped will put the PWC in reverse.  This makes docking a breeze.  These extra features make it easy for even a beginner to pick up this exciting sport. 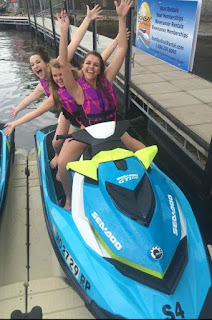 You'll find this out very soon after you begin riding, but before you do, we can assure you that you will have the time of your life.  They are fast and put you a little bit closer to the water than you are on a boat.  You can get into smaller areas, letting you explore more.  It's extra fun to rent a few with friends and race to all of the cool spots that the Lake of the Ozarks have to offer.  After you jump a couple of wakes from some of the bigger boats out there, your adventurous spirit will be hooked.

Our Lake of the Ozarks jet ski rentals are offered in a variety of rental options, making it easy to try one out and see how much you really like it.  We offer rates for hourly rentals, 24 hour, mulit-day, and weekly rentals.  Once you fall in love with the experience, you may be interested in signing up for a wave runner membership next season.  You can be a member April through September and get out on the water every time you are in town and ready for some fun.

We hear that Fall is a pretty popular wedding season around the Lake area, which means that bunches of Bachelor and Bachelorette parties are finding their way down to our exciting fun spot in August.  A Lake of the Ozarks boat rental is a great way to get to and from all of those waterfront bars and restaurants. There are plenty of other events surrounding a wedding that BomBay Boat Rental Co. can provide enjoyable transportation for too. 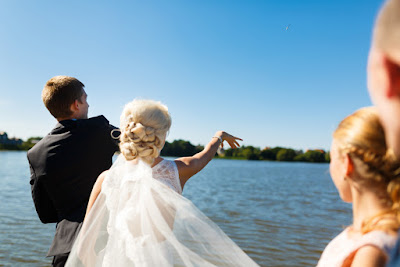 The Lake of the Ozarks is the perfect place to bring all of your friends for a farewell to your single life.  As mentioned above, there are numerous waterfront bars and restaurants to cruise between.  You will find something for every level of fun, whether you want to get crazy and dance the night away or chill out at a lakeside pool.

If your groomsmen and bridesmaids have never met, an afternoon out on the lake is a great way for them all to get to know each other before the big day. You can cove out, crank up the tunes, and become great friends before the wedding.

How about having your rehearsal dinner at one of the nicer restaurants on the water.  Your wedding party and close family members can hop aboard one or two of our boat rentals and take a leisurely trek across the lake to reach your destination.

If you have a ceremony site that is near a boat dock, (and at the Lake of the Ozarks, a lot of them are) you can make a grand arrival to the altar by boat. That is definitely something unique that no one will soon forget.

On the other hand, you could leave the wedding ceremony by boat, take a quick, private cruise together, and then show up at the reception.  Everyone will be eagerly awaiting your arrival on the dock so that the party can get started! 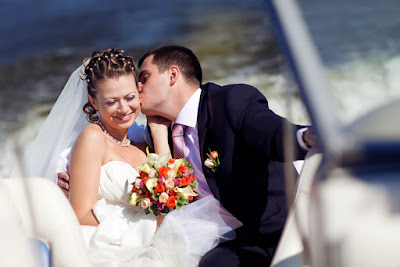 Now you have one more thing to add to your wedding planning list, but not to worry.  It's easy to reserve one of our Lake of the Ozark's boat rentals.  You can send your request online through our website, or don't hesitate to give us a call and talk over the exciting outing that you want to plan.  BomBay Boat Rental Co. would be proud to hlep make your special day even more special.