2 Fun Lake of the Ozarks Events On The Water 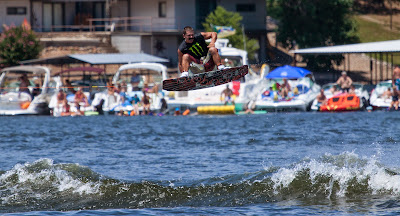 This professional wakeboard competition started out 10 years ago on Lake Powell, but is proud to have come to the Lake of the Ozarks for the past few years. Spectators line up on both land and by boat at the 34.5 mile marker to watch these daring athletes compete.

The contest starts on Friday, running from 2 pm- 7 pm.  Saturday the top 10 go back at it at noon, and the top 5 will finish up the day with the finals starting at 2:30.  An after-party at Captain Ron's is planned for 6 pm.  For all of the information and activities, go to www.brostock.com.


This exciting event brings powerboat racing to the Lake of the Ozarks.  Friday, June 5, the Bagnell Dam Strip will turn into Race Village. You can meet the race teams and see the boats up close. A Lake Race Street Party begins at 6 pm, and at 8:30 pm the Patrick Lentz Band from Kansas City will be performing outside. 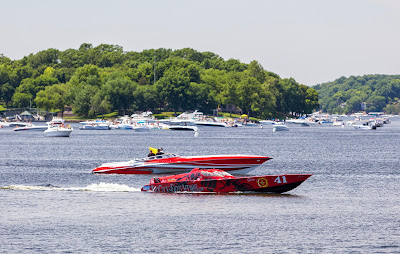 The honorary chairman will take the ceremonious first lap at 11:30 am on Saturday, followed by the opening ceremony at 11:55, and then the races begin.  It all wraps up around 4 pm, but will start back up on Sunday from noon - 4 pm.  The event concludes with an awards ceremony at 5:30 pm at Beavers at the Dam. You can find out more about this exciting race and the boats at www.lakerace.com


So there you have it.  Awesome reasons for the next 2 weekends to call up BomBay Boat Rental Company and rent one of our incredible boats.  It's the very best way to see these events up close and personal.  Take at look at what we have to offer you, and make your reservations today.  Don't forget about our boat and jet ski memberships, too.  These will guarantee that you stay on the water all season long.

BomBay Boat Rental Company offers the best boat rentals at the Lake of the Ozarks, and we have various locations all around the Lake area for you to pick yours up at.  We make it easy for you, wherever you are located, to have access to the best boat and jet ski rentals at the Lake of the Ozarks, but if one of these locations is not convenient enough for you, don't worry.  We deliver too!

Camden on the Lake 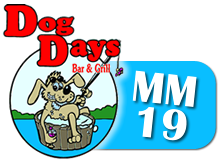 The next time you are planning to be at the Lake of the Ozarks, reserve your own boat or jet ski rental from BomBay Boat Rental Company.  You can visit one of the wonderful establishments listed above for a meal before or after you pick it up, or you can make arrangements for us to deliver your rental directly to you.  Visit our reservation page or give us a call today.

4 Myths About Our Very Own Lake of the Ozarks 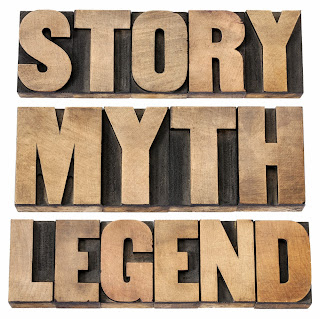 When you take out one of our boat rentals at the Lake of the Ozarks, you are in for a fun-filled adventure on the water.  While you are cruising in one of our Lake of the Ozarks watercraft rentals, do you ever take a minute to think about what may be under that water? Deep below the surface, too far for the eye to see?

If you believe everything that you hear, then this might be too creepy for you to continue reading.  If you love a good tall tale and the mysteries that surround them, then here are a few about the beautiful Lake of the Ozarks.

1. Giant catfish at the bottom of the lake.

People love to tell stories about the giant, man-eating catfish at the bottom of the Lake of the Ozarks, usually near Bagnell Dam.  They say that the Dam cannot be inspected because the divers will be eaten by these monsters! 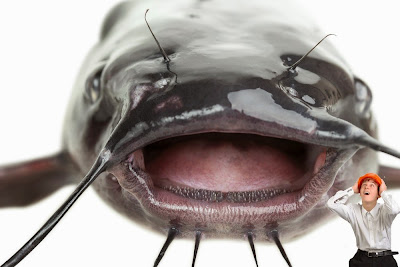 Don't worry, this one is NOT true, and the Dam IS inspected regularly.   The largest fish found in this area is the paddlefish, and they don't even eat meat. The largest catfish ever caught in the Lake of the Ozarks (on record) was 103 pounds.  Big, but not big enough to swallow a man.

If you still want to believe in these giant catfish, I did come across a story that said there used to be the Missouri Aquarium on the Bagnell Dam Strip, and it featured a 5-foot long catfish that they claimed was caught in the Lake of the Ozarks.  Even scarier, it had bite marks around it's middle!  I couldn't find any proof of this, but it sure is a good story to make me want to keep looking deeper.

2. Dozens of towns were flooded out of existence when the Dam filled the lake.

Once Bagnell Dam was completed in 1931 and Lake of the Ozarks began filling up, rumors say that dozens of town sites were flooded and lost underwater. 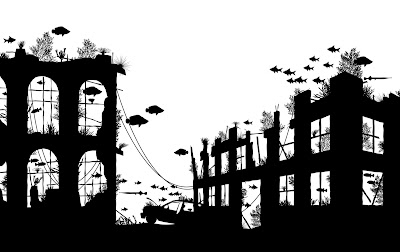 This is also NOT true. The only town back then that was actually large enough to be considered a real town was old Linn Creek.  The others were really just made up of a building or two, or a few cabins.  Linn Creek was completely relocated, and all other "towns" were abandoned, and any large buildings were demolished.

Technically, 8 town sites were truly flooded, 4 were no longer in existence by 1931, and 11 were at a high enough elevation that they were not actually covered by the water.  In actuality, NO towns were flooded that still existed.

3. A church steeple peeks just about the waves when the lake is low.

Of the many people that tell the story of a church steeple peeking out of the water, most of them can never remember exactly where it was that they saw it. At least one person stated seeing this at Linn Creek Cove. 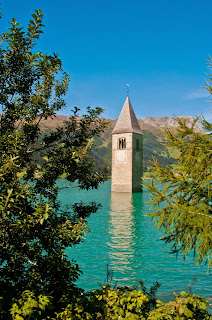 Old Linn Creek was relocated, as told above, and old photos show 3 churches in that town.  After everything was either moved to the new Linn Creek or demolished, photos show that nothing taller than a man's head was left in the old town. Definitely not a church steeple tall enough to peek out of the filled lake.

One possibility is an optical illusion.  From a distance, some things like a lighthouse in the area, can look like they are jutting out of the water, but when you get closer to it, it's actually on dry land.  Another possibility is suggestive thinking from stories like this combined with a few adult beverages.

4. There are grave sites underneath the Lake of the Ozarks.

There were 60 cemeteries and possibly 2800 graves in the area before Bagnell Dam was constructed.  Union Electric created 8 brand new cemeteries to relocate the graves to.  The problem was, back then not all graves were clearly marked.  Many had small, family burial spots that were marked with a rock, a tree, or some other kind of marker that only family members might be aware of. Every effort was made to move all of the graves before flooding the dam, but there is a very good possibility that a few may have been missed.

So what do you think?  Just a bunch of tall tales, or are you interested enough to look into this a little further?  True or not, it does add another aspect to the excitement that is the Lake of the Ozarks.  Come on over to BomBay Boat Rental Company, take out one of our boats or jet skis, and do a little research of your own.

Rent Our Sylvan Mirage Tritoon for an Adventure on the Lake

Cruise in comfort in one of our

Tritoon rentals on the Lake of the Ozarks!


The weather has finally warmed up, so now is the time to bring your family and friends to the best boat rental company at the Lake of the Ozarks and take out one of our Tritoon Rentals.  Venturing out on this magnificent watercraft sets the stage for an exciting adventure boating on the Lake of the Ozarks.

BomBay Boat Rental Company proudly offers the Sylvan Mirage 8524 Cruise LZ.  It has a spacious deck and four-sided wrap-around seating.  You can slice your way powerfully through the water while having plenty of space for everyone on board to stretch out.  Bring on your giant coolers and water toys, there's plenty of room! 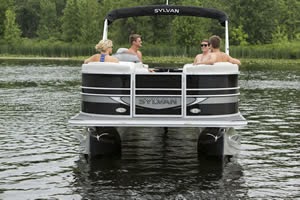 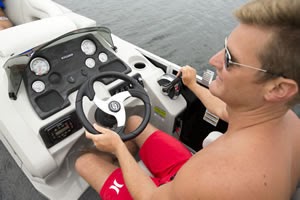 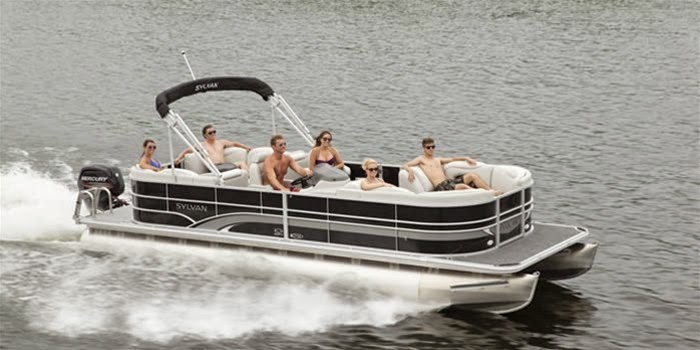 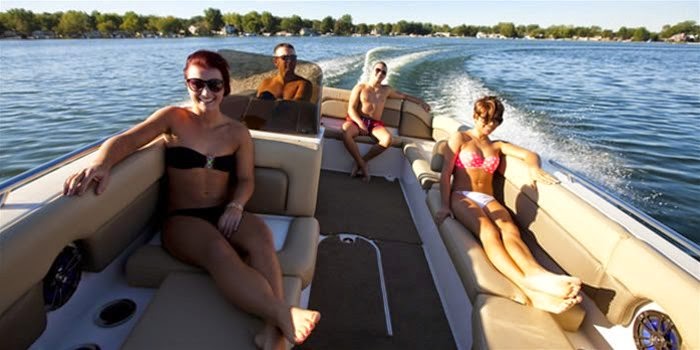 Between watching the video above and reading all of those amazing specs, we just bet you are ready to head on over and reserve you own Tritoon.  Call us at 1-888-259-6096, or go to the "Reservations" page on our website and fill out the short form.  When you rent your boat from BomBay Boat Rental Company, you'll be cruising in style!